“The center of activity in Pauma Valley in 1846 was Rancho Pauma, owned by Jose Antonio Serrano,” wrote Hugh Crumpler in an 1887 San Diego Union article. Serrano was the grandson of Francisco Serrano, who came to California with Father Junipero Serra in 1769. The rancho was granted to Serrano in November 1844 by then Alta California Governor Manuel Micheltorena.

Crumpler noted that the Pauma Indians “provided much of the labor needed to operate Pauma Rancho.” He added “relations between the Indians and the Californios had been strained from the time the Mexican government secularized the missions in 1834.”

The Pauma, like many other California Indians, were reduced to being tenants in their own land. Some of the displaced Luiseños worked on the ranches as cowboys, servants or laborers. Others attempted to return to their native way of life. Ranch owners and their overseers often treated those who stayed on the ranchos worse than slaves. Even Eurocentric 20th-century historians couldn’t avoid mentioning, “the harsh treatment the Indians received from the settlers, ranch owners and padres…” (Phillip Rush, 1865). The Mexican-American War further complicated the relationship between Serrano and his indigenous residents/laborers when the United States entered the struggle for control of the land. The war triggered the Pauma Massacre, the event most often associated with Rancho Pauma.

After the Mexican American War in 1846, and the Treaty of Guadalupe Hidalgo in 1848, the Luiseños came under the rule of the United States. The Luiseños had few rights and many were homeless. American settlers, especially after the Civil War, encroached on Luiseño lands from 1848 to 1875. Again, it is important to note that Pauma and the other Luiseño reservations today were intact throughout this process. Many individuals did leave but the villages and reservation lands were never fully deserted. Some Luiseños remained in small settlements near the missions, while others returned to old villages in the mountains. The Anglo-American settlers took the best farm and grazing lands in the valleys. In the mountains, mining speculation attracted other Anglo-Americans to areas like Palomar Mountain.

Jose Antonio Serrano filed a claim with the land commission in 1852. The land claim was approved in 1871 to Serrano, his brother in law, Blas Aguilar and Jose Antonio Aguilar. Over the next two decades, parts of the ranch were sold to American landowners. In 1851-52 three commissioners negotiated 18 treaties between the United States and California Indians. The negotiators proposed gathering all the Luiseño into a large “Mission Indian” reservation. In this proposal, Pechanga was to be the home for all these “Mission Indians.” While Pauma was a signatory of one of these treaties, the Treaty with the San Louis Rey, Etc. 1852, they did not agree to relocate to the Pechanga site, and this proposal was never fulfilled. Fearing the loss of resources from the 7.5 million acres of land set aside in the treaties for California Indians, the California state legislature lobbied congress to deny federal ratification of the treaties. The treaties were subsequently placed under an injunction of secrecy, leaving California Indians vulnerable to homesteaders seeking to lay claim to tribal lands.

In 1875 an executive order by President Grant set aside reservation land for Luiseños at Rincon, Pala and La Jolla. Later, beginning in 1891, reservation land was set-aside for Luiseños at Pauma-Yuima, Pechanga and Soboba with the Act for Relief of Mission Indians. In effect, Luiseño political structure was forced to become encapsulated under these reservation structures. Some Luiseño families in the coastal areas, near the original Luiseño missions, were not included and remained federally unrecognized. Today, they are organized as the San Luis Rey Band of Mission Indians.

In 1892, the Serrano ranch site was designated as part of the Pauma-Yuima Reservation. It is important to note that the Bishop of Los Angeles, Francisco Mora, played a significant role in our keeping part of our traditional homeland. “In Pauma, a small amount of land was purchased from the Catholic Bishop of the Diocese, the owner of the rancho grant. This purchase included three plots of land and water rights. The largest, known as Pauma, contained 250 acres, with the right to thirty inches of water from Pauma Creek” (PITR 43). The Pauma, like other Luiseño bands, had little choice and moved from their larger traditional land base and re-settled on the less desirable, rocky terrain of their newly established reservation. 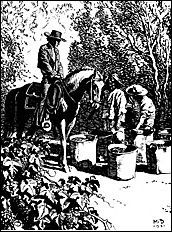 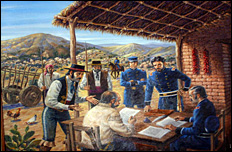