European interaction with the indigenous people of Southern California was limited until the mid 1700s. The Spanish set up the Mission system to protect their claim to California land, economic prosperity and religious conversion.

The Mission San Luis Rey was built in 1798 and brought many changes to our ancestors. The general designation “Luiseño” was used by the Spanish in reference to the indigenous people as a result of their proximity to the Mission. Localized small villages were further identified, for example the “Pauma” band, the “place where there is water,” known so because of their location near the San Luis Rey River. The Pauma name predates Spanish arrival.

Since Pauma was located inland, initially its people were not extensively drawn into the Mission environment. With the establishment of the Pala Assistancia in the early 1800s, the presence of the Church and the Spanish soldiers became more prevalent. Most Pauma people lived in their villages and worked as laborers for the missions.

Father Junipero Serra eventually established twenty-one Missions up the California coastline from San Diego to San Francisco. The Mexican government secularized the Missions, and the era ended in 1834. Unscrupulous ranchers quickly moved in and took rich, fertile land from the Luiseño people. 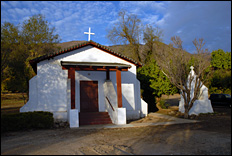