Prior to the start of our contemporary (modern) government, Pauma governed itself by custom and tradition. Our political leader was referred to as the spokesman and he or she had a council/committee to assist him or her in the daily needs of the tribe. Government duties frequently required a more hands on approach and the spokesman needed to be available around the clock.

The tribal council is responsible for setting policy, as directed by the General Council, and administering a variety of governmental programs on the reservation. The Pauma Band of Luiseño Indians is a federally recognized Indian tribe operating on a “government to government” basis with federal, state, county and municipal agencies. Pauma Tribal Council. 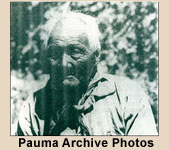 The Pauma Gaming Commission was established on June 6, 2000. The Commission consists of three (3) members, who are elected by the General Council of the Tribe, and are each appointed to a five (5) year term.

As a Tribe, Pauma has always remained powerful and united in numerous battles. When many would have faltered, the Pauma General Council has remained strong, just as their People have always done in the face of oppressing forces—whether it be the State of California, the Mexican Government, or even first Spanish invaders. Their elders always taught their young leaders to protect their sovereignty, fight for their lands, the right to develop their own economy, and fight for justice. These battles have led the Tribe to becoming leaders in tribal judicial systems and court development. Furthermore, Pauma Tribal Court stands as a pillar of strength and sovereignty. Although the Pauma people may not have hundreds of thousands of tribal members, they believe strongly in fair and equal justice for all people.